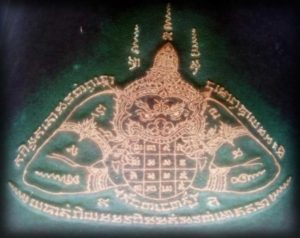 Sak Yant Thai Temple Tattoos is the first Thai Occult Related Topic i began to author on the internet, first with an old Geocities free Yahoo website (now deceased since the end of Yahoo Geocities), and then with sakyant.com which was ‘bought for me’ by somebody, who turned out to be keeping the domain for himself after my added content began to attract lots of traffic. I then bought Sak-yant.Com and transferred all of my content to that website, and began again. The rest is History. In 2010 i authored and self-published my first Ebook on the subject of Sak Yant Thai Temple Tattoos, which after having many Khmer people commenting, decided to call ‘Sak Yant Buddhist Tattoos’ (taking the ‘Thai’ out of it). In my opinion, there is no true history of Sak Yant in Cambodia, and the Thai-Khom, Agkhara Isan, Lanna, Tai Yai, Taewanakri and other sacred scripts found in the pantheon of Sacred Yant, have little or nothing to do with Khmer Alphabetical script (Khom), which is merely similar because all of these scripts are influenced by Sanskrit, and are hence similar in certain aspects.

How to Inscribe Ga Agkhara First Consonant in Khom

How to inscribe Maha Namasakara in Khom

My Sak Yant Foundation Youtube Channel is for those interested not only in the art of Sak Yant Thai Temple Tattoos, but also in the Wicha (Sacred Art and Science) of the Geometry and Composition, and Anthropological roots of Sacred Yantra designs. For those interested in their Magical and Spiritual meanings, the channel is also intended to be of Anthropological interest.