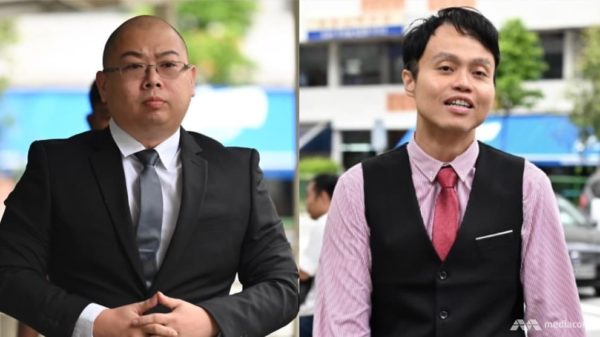 The Singaporean Justice and Their Paid Cronies the Singapore Cybercrime Police Division, have Embarrassed the Country in the Eyes of the World Once Again! Poor old John Tan (SDP) and Daniel De Costa, (and Xu Yuan Chen in addition).  John Tan and Daniel both being Persecuted by the CORRUPT SINGAPORE JUDICIARY MAFIA. John is being Persecuted with threats of Contempt to DISQUALIFY him from contesting in the Upcoming Election (Powers that be shitting their pants he might get in), after running the Yellow Ribbon Prison Run with Daniel De Costa both wearing ANTI DEATH PENALTY T-Shirts). 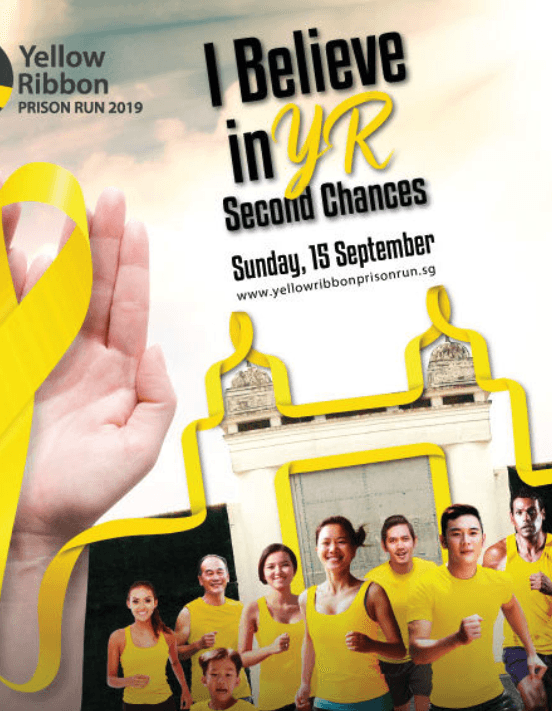 36-year-old Mr Terry Xu Yuan Chen, TOC’s editor, has been facing investigations regarding an article that alleged “corruption within the Singapore Government”, as well as matters related to our Constitution.

Daniel De Costa received a second charge of unauthorised access to computer material in addition to the first charge. De Costa had allegedly logged into the email account of a “Willy Sum” and submitted the article to TOC. The article, titled “The Take Away from Seah Kian Ping’s Facebook Post” was published under Willy Sum’s name.

Willy Sum was really a person called Sim Wee Lee, also known as Willy. The article, published on Sep 4, alleged that “we have seen multiple policy and foreign screw-ups, TAMPERING OF THE CONSTITUTION, CORRUPTION AT THE HIGHEST ECHELONS, and apparent lack of respect from foreign powers ever since the demise of founding father Lee Kuan Yew”.

All For Having A Jog In A Legally Registered Jogging Activist Run, and wearing Anti Death Sentence T-Shirts.!!!!!

“Singapore’s ministers should not have the power to singlehandedly silence anybody it wants to, including foreigners and their websites, and freedom of expression.  Singapore’s government wants to be the arbiter of what anyone can say! This is True Human Rights Abuse in Singapore, and STATE COMMITTED at That!”

WHERE IS THE FREEDOM OF EXPRESSION IN THAT SINGAPORE??? RFMEMBER THE UN TREATY ON THE WORLD CONVENTION ON HUMAN RIGHTS YOU SIGNED!!!

As far as Singapore’s Silencing People’s Freedom of Expression is Concerned, even Wikipedia is constantly being re-edited to Hide the Facts about Judicial Corruption in Singapore, removing the true statistics of corruption, and replacing the info with Fake News type Propaganda by agents of the Singapore  Government who constantly monitor any new edits on Wikipedia on the ‘Corruption in Singapore’ page entry.

Whereas according to Human Rights Watch, who Singapore have also attacked, and tried to force the removal of online facts, claiming it to be ‘Fake News’, the Truth sounds more like this; “Singapore’s political environment is stifling, and citizens continue to face severe restrictions on their basic rights to freedom of expression, association, and peaceful assembly. The government effectively controls print media, and online media outlets are forced to register with the government and post a significant bond. Bloggers and online media that comment on political issues are targeted for prosecution with vague and overly broad legal provisions on public order, morality, security, and racial and religious harmony.”


Returning to the constant Vigil and Re-Editing of Wikipedia, one constantly removed and replaced phrase i have seen re-edited on a daily basis is the statement that ‘Corruption in Singapore is generally perceived as low. Cases are mostly handled by the Singapore Corrupt Practices Investigation Bureau (CPIB), a government agency in Singapore that investigates and prosecutes corruption in the public and private sectors’ The truth is that Corruption is percveived as High by most Citizens, as i myself have asked over 300 Citizens, ALL but 5 of whom agreed that the Justice System is Corrupt, and many Singaporean Citizens also expressed the Opinion that the Women’s Society of Singapore  who rule the Family Justice is also as Corrupt as a Colombian Army Officer. (and that’s saying something!)

In fact, the Singapore Government are not only posting Fake News on Wikipedia, but also on their own websites to bury the true facts posted on other sites, in the Google Search Engine. 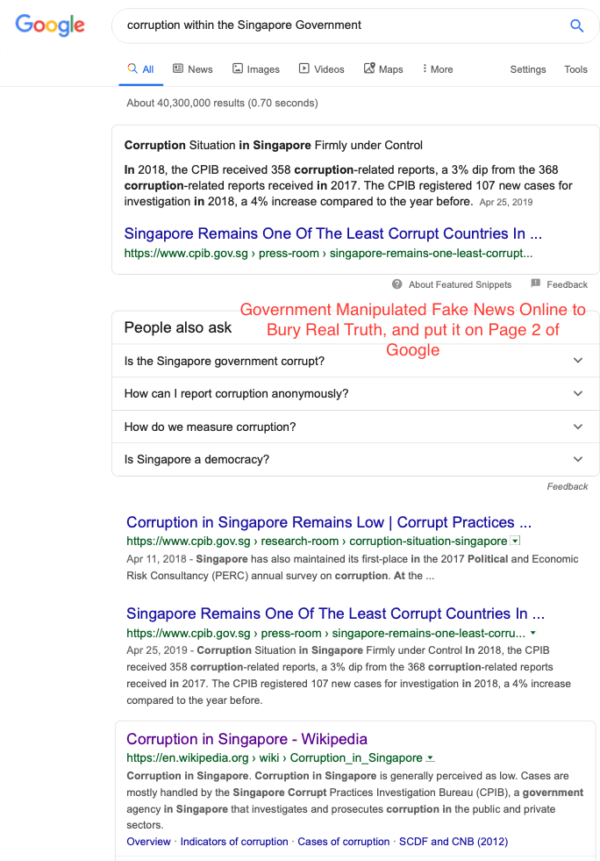 Government Manipulated Fake News Online to Bury Real Truth, and put it on Page 2 of Google

The CPIB are however also Cronies of the Government, and Hence, Part of the Corruption Ring, and will ALWAYS FIND CORRUPTION when investigating the Enemies of the State (Dissidents whose Freedom of Speech is Silenced), but will NEVER FIND CORRUPTION WITHIN ITS OWN ECHELONS.

Mr Xu Yuanchen stands accused by the State of publishing a defamatory article in Willy Sum’s name, without proper verification of the writer’s identity.

De Costa was arrested that same day at 2.50pm. Police also discovered he had plans to leave Singapore on a flight scheduled at 3.45pm. A search warrant allowed them to seize his electronic equipment as well.

Both parties will be charged with “criminal defamation” with possible jail terms of up to 2 years and a fine.

Hats of off to Xu Yuanchen for refusing to sign the below document! 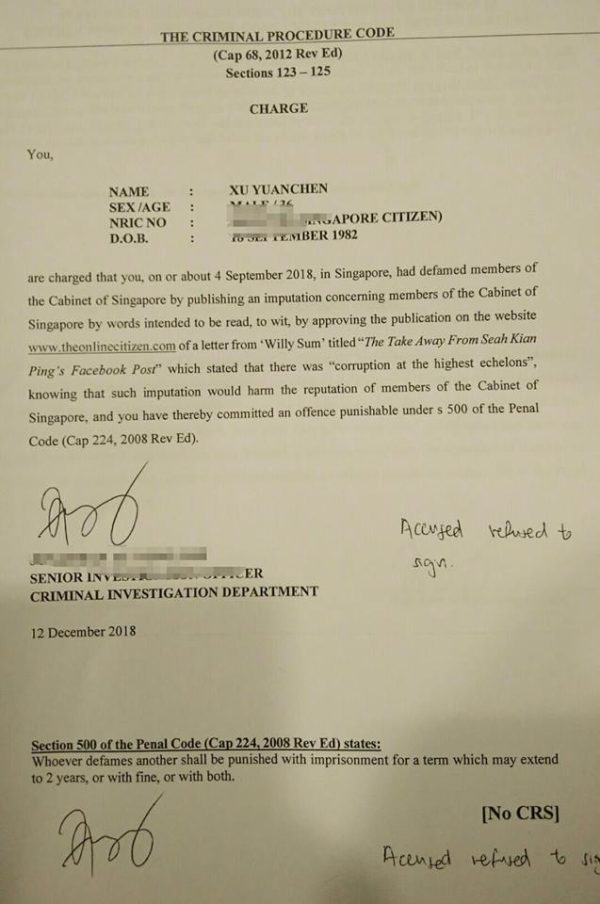 Editor Xu has “refused to sign” the charge sheet.

De Costa faces an additional charge for “unauthorised access to computer material” and utilising Mr Sum’s account without permission. He could face a $5,000 fine and/or a 2-year jail term.

I myself find this strange after reporting exactly such a Cybercrime to the Head of the Division itself Office Tan Yong Hua of the Singapore Police Cybercrime Division,

No prosecution was made for the two reported Cybercrimes, commited against me, to Illegally access my Apple Id and iMessages to steal Data and Manipulate it, and present the faked manipulated stolen Data as evidence against me in court, by the Abdutress of my Son, his Own Mother.

She stole the evidence, to evade having to return my Parentally Abducted son Angelo, who was abducted by the mother from Thailand to Singapore in 2014, and used Illegal Methods to Hoodwink the Singaporean Family Justice into not returning the child. Tan Yong Hua told me to fly to Singapore and make a police report, which i did, and after various emails, replied saying no action was going to be taken. Below is the initial email response from the Cybercrime Division. 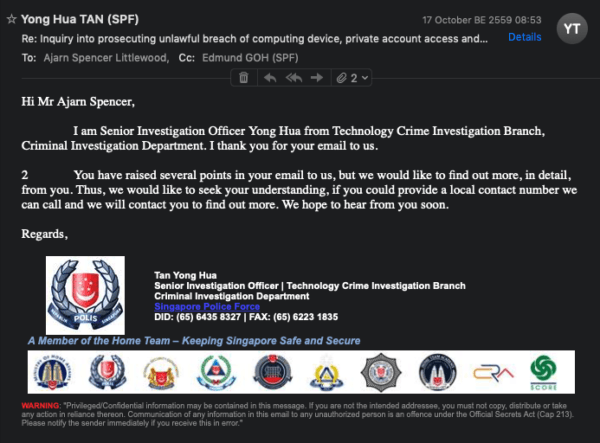 Singapore Cybercrime Division’s head Officer Tan Yong Hua’s first response to my report of a cybercrime, committed by the Abducting Parent (Mother of my Abducted Son Angelo),  to Illegally Obtain Digital Evidence stolen from a private chat with my Brother, to Dupe the Justice System. – DISCLAIMER!!!!  I Ajarn Spencer Littlewood have never signed the Official Secrets Act. Adding such a warning as seen in the above screenshot of an email from the Singapore Police, is not legally Binding, and is in Fact an Intended deception. aimed at silencing or frightening those Citizens who do not know their international right to freedom of speech. It is intended to try to scare potential whistleblowers into revealing the contents of the emails. It is however not  legally acceptable, nor is it binding to put this kind of message in the footer of an email.

I, Ajarn Spencer Littlewood am not subject to, and have never signed the Official Secrets Act of Singapore, and as a British Citizen, am not subject to the laws of a country i neither live in nor visit, Nor do i recognise your self invented laws, so fuck yourselves!!!.

Here below in screenshot of my emails to Tan Yong Hua, is the story i told Tan Yong Hua, before flying to Singapore and fling an Official Police Report which was forwarded to him personally, as requested by him. I now realise that this was to keep the matter hidden, NOT to help me. Being sweet-talked by state officials in Singapore has happened to me on multiple occasions, and i am no longer so Naive to fall for it. I was however at the time, and believed he wished to help, which as it turns out, he didn’t. 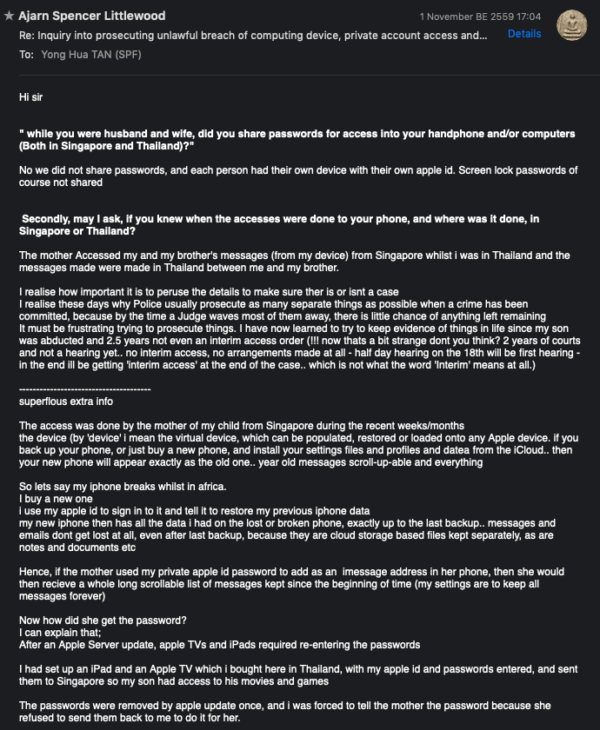 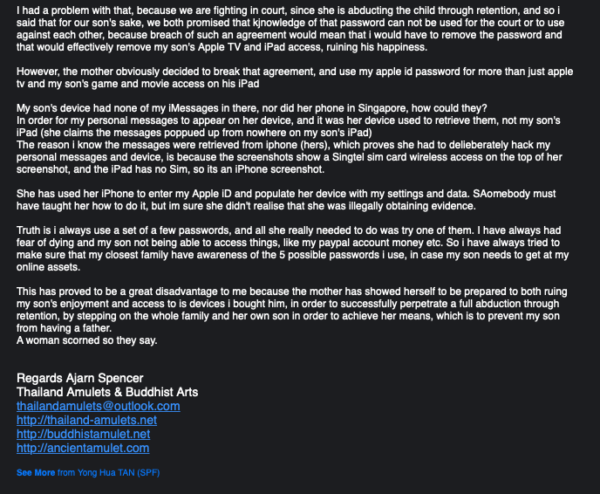 I say to Tan Yong Hua; Why was my Singaporean Ex Wife’s act of “unauthorised access to computer material” not Prosecuted, but the allegations against Daniel Da Costa are????

In my case, the Cybercrime Division refused to Prosecute, and Courts Accepted the Stolen Evidence Knowing it was illegally obtained, and ignored the allegations that the data had been manipulated to deceive. (I shall reveal the Corrupt Judicial Misconducts against Myself and My Internationally Abducted Son Angelo in a separate Post).

SO WHY TAKE ACTION AGAINST DANIEL DA COSTA BUT NOT MY EX WIFE?????

The Singapore Justice IS UNDENIABLY CORRUPT, as are their Cronies in blue-black, the Police. I myself had a Singaporean log into my Apple ID and use stolen Data to harm me, and Tan Yong Hua head of Cybercrime Division took my complaint and DID NOTHING!  So Cyber-Crimes against Individual Citizens is Ignored by the Singapore Police. But…. when someone criticises the government, The Cybercrime Division Bends over and spreads their Buttocks!

You Failed To Silence Human Rights Watch, and You Singapore, will also Fail to Silence other Human Rights Warriors around the World. For We Are Anonymous, Legion, and We are Not Subject To Your Laws Outside Of Singapore, And You Will Fail To Silence Me, Because You, the Singaporean State, and its Corrupt Singaporean Judiciary, Assisted In The International Parental Child Abduction Of My Son In 2014, To Hide It From Your Compulsory Annual Report To The Un On The Civil Aspects Of International Parental Child Abduction And Article 10 Of The Rights Of The Child

NOW TRY TO SILENCE ME YOU CORRUPT DESPOTS! 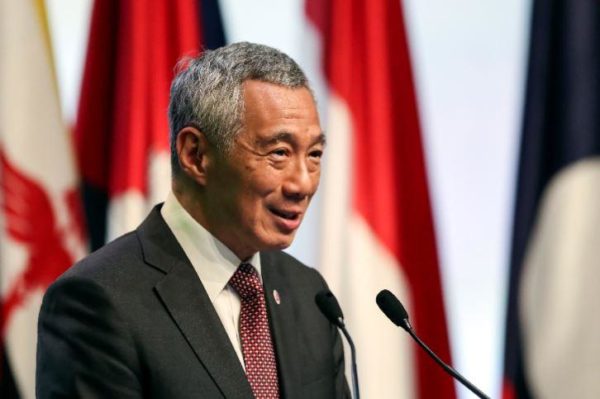 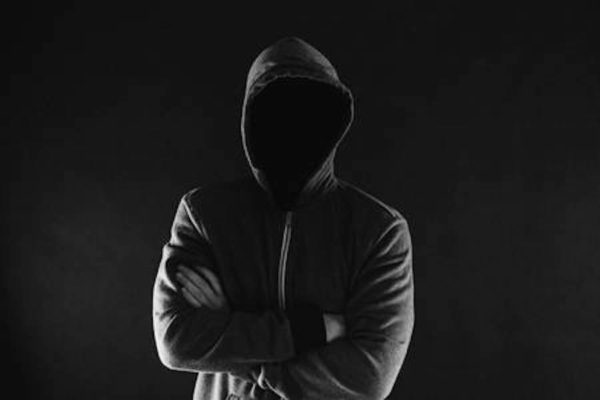 We are En-Masse Virtually Anonymous – We Are Legion – But some of us are brave enough to Show Our Faces, like me, Ajarn Spencer Littlewood. After what you did to my son Singapore, who i shall probably never see again, YOU SHALL PAY WITH THE LOSS OF REPUTATION YOU DESERVE, AS WILL THE INDIVIDUALS WHO ASSISTED IN MY SON’S ABDUC TIOBN AND RETENTION, AND REMOVAL OF HIS RIGHT TO ARTICLE 10 OF THE WORLD CONVENTION ON THE RIGHTS OF THE CHILD!