A visibly rich in Muan Sarn Kala Ta Diaw Powders, mixed with lacquer and molded into the classic shape of the Phra Rahu Asura Deva Eclipse God eating the Moon/Sun. Judging from its age characteristics and design i would estimate it to be from around the era of Kroo Ba Nanta, and suspect it could be from this master. Judging from the age, Quality of muann sarn powders and design quality of top artisanry, one can assume that whichever Kruba Monk made this amulet, was a great Monk of the Era, and the only questions is which Great Monk Made it. I will encase this amulet for free in waterproof casing included in the price for free if you choose this option. You can also email me to ask for gold casing or Line me on;

Kroo Ba Nanta was one of the great Lanna Masters of Olden Days, with little known aout his trajectory, except for his great Wicha Phra Rahu, and Mastery of rgw Grimoires of Thai Lanna Sorcery. His Phra Rahu is considered number one Phra Rahu of all time, especially in his hand carved one eyed coconut shell versions (see below picture for classic example). The sale price is to compare what the true price would be on the internet, but because i sometimes hunt things down for bargain prices, i can offer them at Thai People’s local market Price, on the International Scene. This benefits you, if you are of those who trust me and my trajectory, knowledge and judgement in Thai Buddhist Amulets. 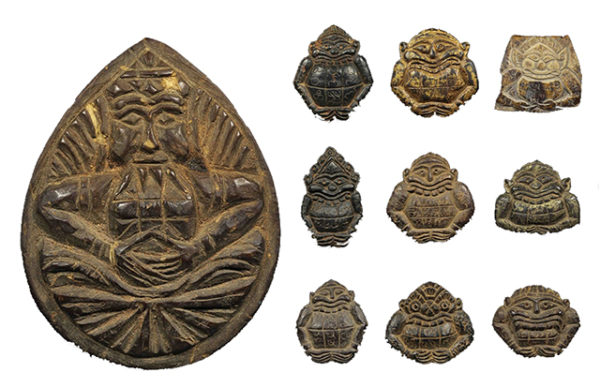 The designs and forms and shapes were so many-fold and undocumented, that it is a matter of recognizing the inscriptions or the Muan Sarn powder admixtures, and age, which one has to use in authenticating the Phra Rahu of Kruba Nanta, for example by comparing it with the Pantheon of Phra Rahu from Luang Por Noi 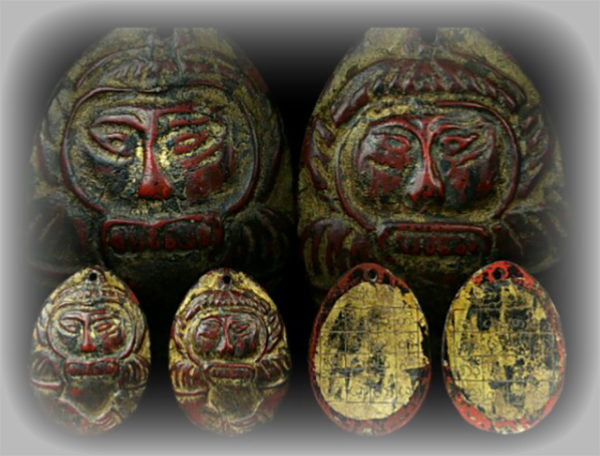 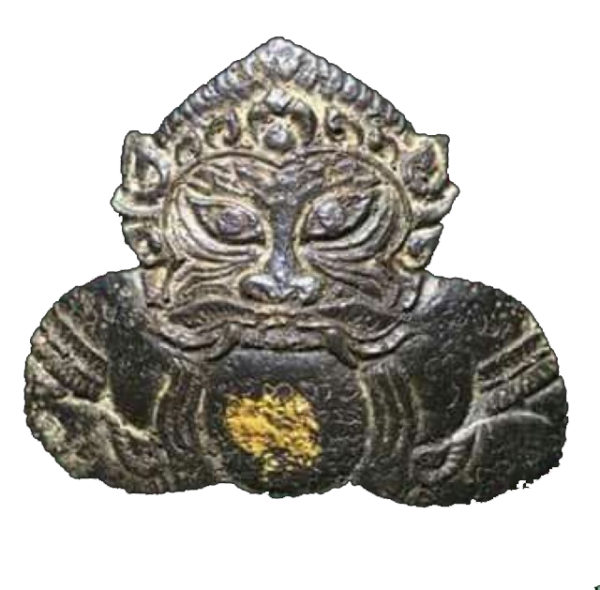 Below is the famous Pim Sema Glab, which had many forms depending on which artisan made it (various artisans were used), and which was also continued by LP Noi’s apprentice Luang Por Pin, who holds almost equal status in the Wicha Pra Rahu as his Mentor LP Noi 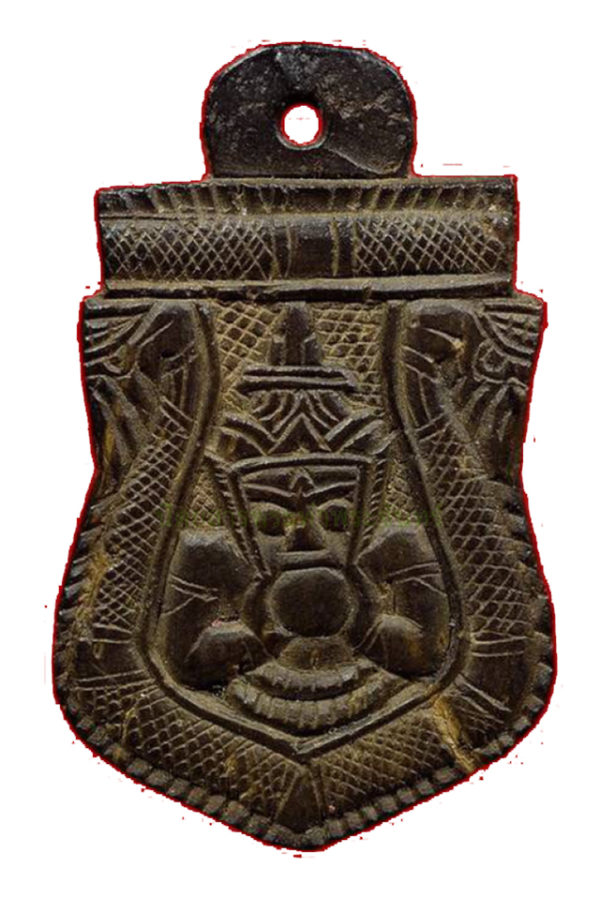 Above; Rahu LP Noi Pim Sema Glab Version 1 the design is highly influenced by Lao Buddhist Artistic influence, dues to most artisans in the area of Wat Sri Sra Tong being Lao Immigrants.

My Conclusion; This amulet is a almost certainly a semi to full Centenarian amulet, made from one eyed coconut powders with black lacquer, and comes from a top Olden Days Lanna Master of the Caliber of Kroo Ba Noi, Pra Ajarn Pin, Kroo Ba Wang, Kroo Ba Nanta, ‘Kroo Ba Chum, Kroo Ba Nanto…. Such an amulet would auction for around the 10,000 Baht price range in Thailand with avid collectors, making this amulet highly price-worthy, at a third of the standard market price at 3800 Baht only, due to my skills in amulet hunting allowing this price.

Which of these Masters one any individual ‘expert’ would allocate this amulet to, would depend on the association and the Gammmagarn Judge in question, making the matter one of opinion based on personal knowledge of the line of amulets. 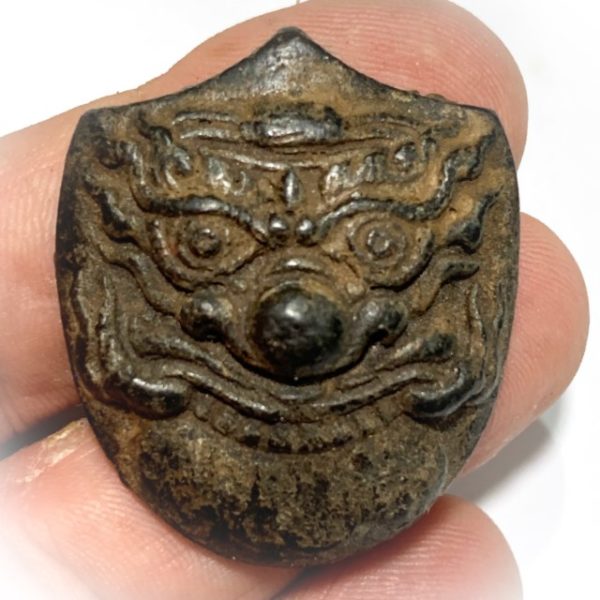 I myself have given enough time and more than most competition judges, to perform daily study (many hours a day for 25 years), and hence, i make my own conclusions based on my 25 years of study, collection, and authorship on Thai Buddhist Amulets, in preference to the opinion of another person.,

I also own a pantheon of amulet catalogues and reference material ranging into the hundreds of books on hundreds of Master Monks and their amulets, and a collection of 15000 amulets in my possession to study, many dozens of which are Ongk Kroo first prize trophy winners.

I  believe i do not need to ride on the shoulders of associations to increase or create credibility in my knowledge of amulets, for those who know me and use my services need no convincing. 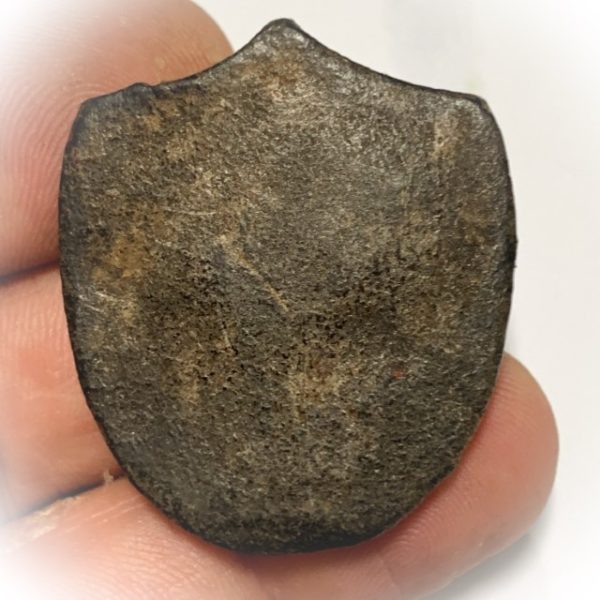 You decide, just like me, if the amulet appeals to you, and that’s that! As a collector of personal museum of ancient Lanna Artefacts, for me, any item like this is a wonderful addition to my museum and adds sacred protection to my ashram and household.

I am too lazy (actually i am too busy, not lazy), to put in the weights and sizes in the product details, as you can see from the photos how big the amulet is and i send free registered air parcel worldwide so weights don’t matter either with this amulet. 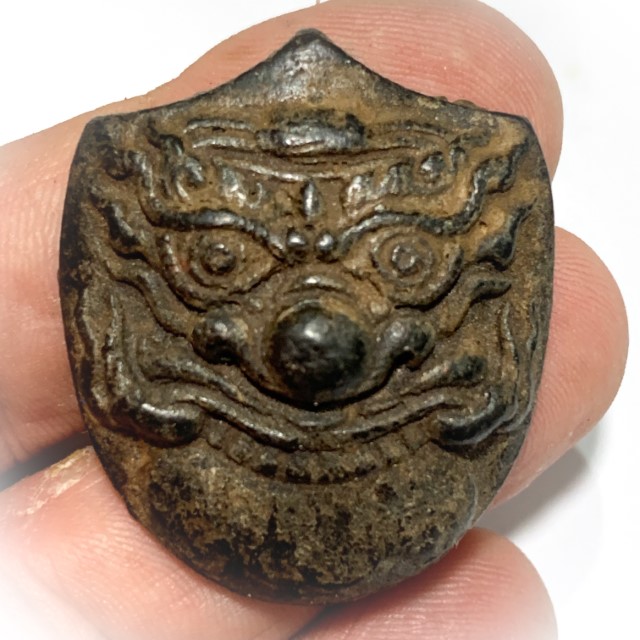 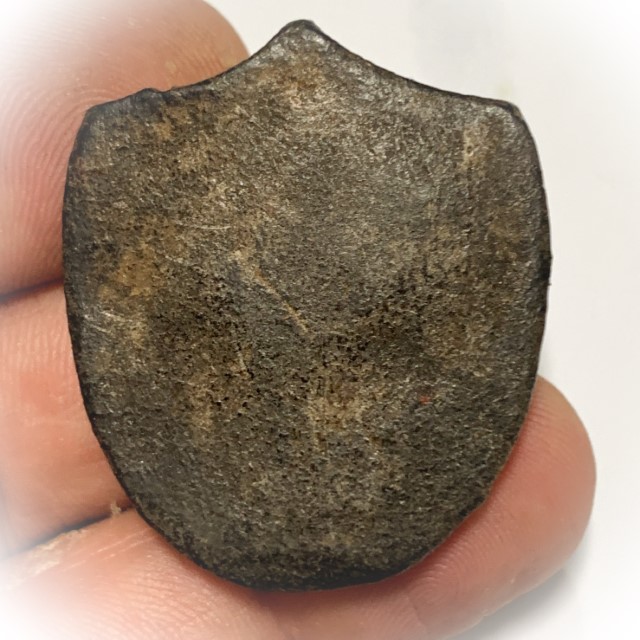 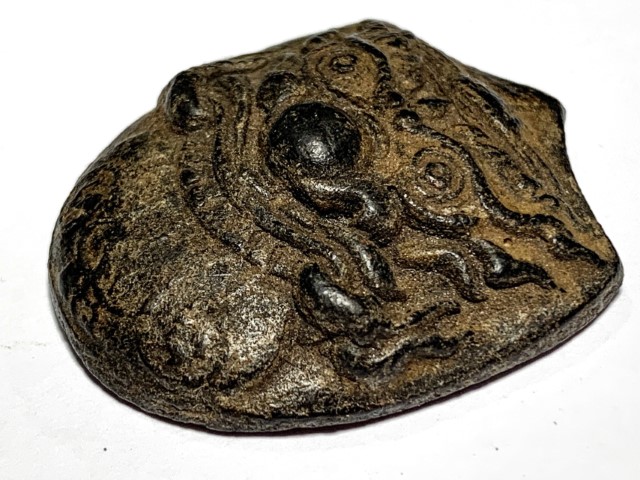 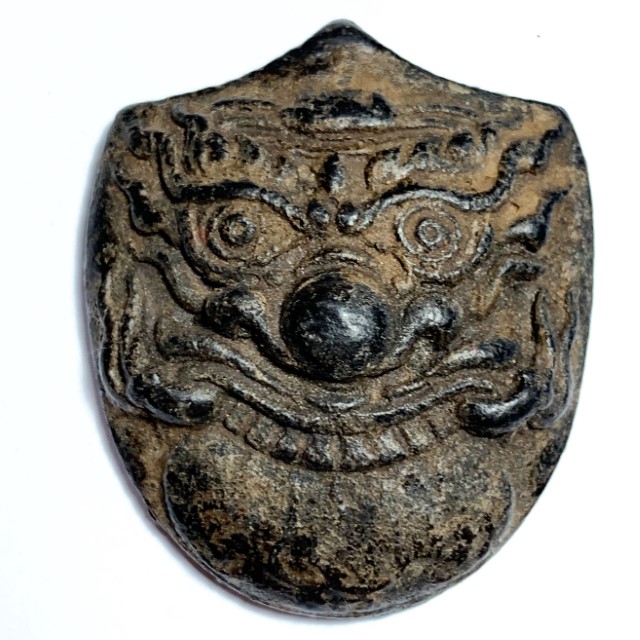 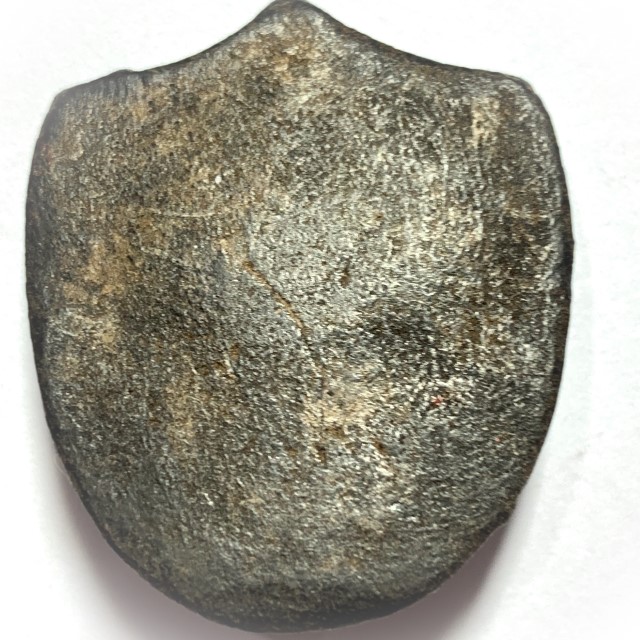 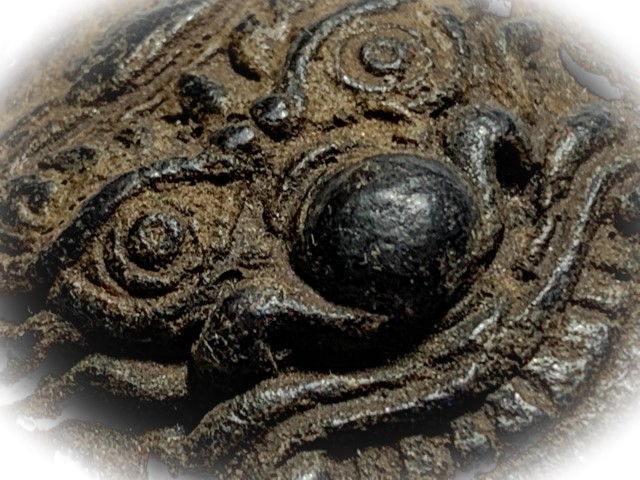 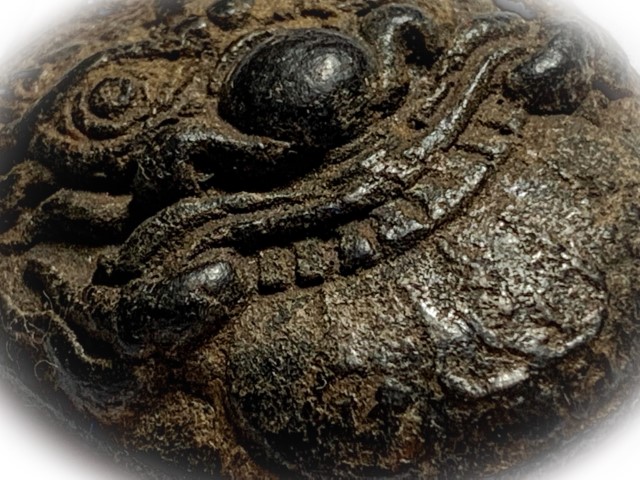 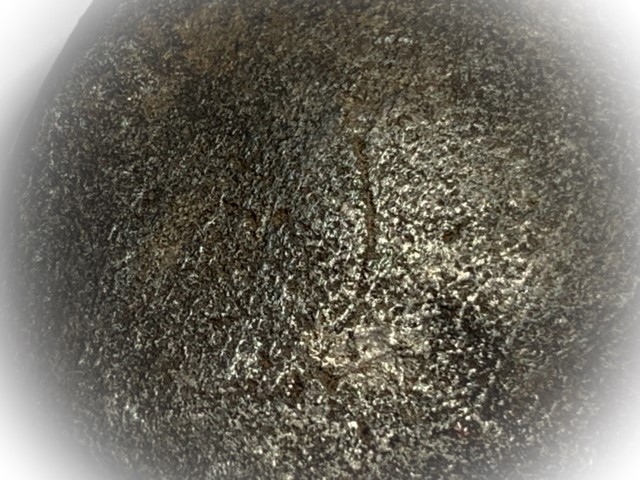 A top amulet is a top amulet, and this is visibly such an item, even to the untrained eye. Please read on below the image for my synopsis and philosophy regarding this and other amulets about to begin to populate my personal ‘fair price honest explanation‘ amulet shop.

In Thailand, there is a large faction of collectors and devotees who collect ancient amulets of authenticity and sacred power, from the category ‘Mai Saap Tee’ (Don’t know maker/origin).

Considering nobody knows who made amulets over 200 years old, i find it strange how modern devotees who collect modern era amulets before discovering the love of the study of the truly antique Old Amulet (where the maker is known and published), seem to need to know who made the amulet. in order to revere or appreciate its sacred value and rarity as a collectors item, and cultural value.

I myself am not a type of collector/devotee who needs to know precisely which master made an amulet, rather, am much more interested in its age, authenticity, and sacred power, as well as its historical aspects in magical legendry. and the sacred muan sarn used to make and empower the amulets, as we as the intensive study in close up macro of sacred powders, leaden and metallic amulets, and carved wood, ivory, bone, skin, stone, tooth and horn substances. 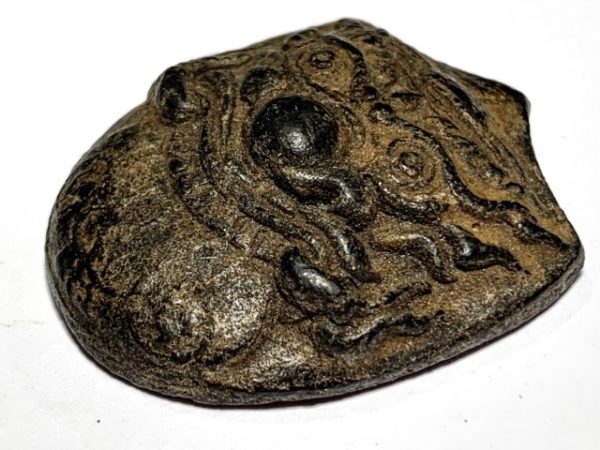 I hence consider this amulet to be comparable to those amulets which we revere of the Benjapakee family, who nobody knows who made them, for they were made 700 – 1000 years ago, and the only thing that matters, is that it is an ancient sacred artifact truly blessed by a Buddhist master of forgotten times.

This is what museums find interesting, but what a true devotee of Thai Magical amulets considers to be a highly sacred and collectible item, and which has no need to define its maker. This is a fine ancient amulet of Lanna Origin from what can only be a top Lanna Master Kruba Ajarn, for only such masters could produce an amulet of this quality and power, with such rare authentic Muan Sarn that only the True Tudong Masters can obtain in their jungle wanderings. 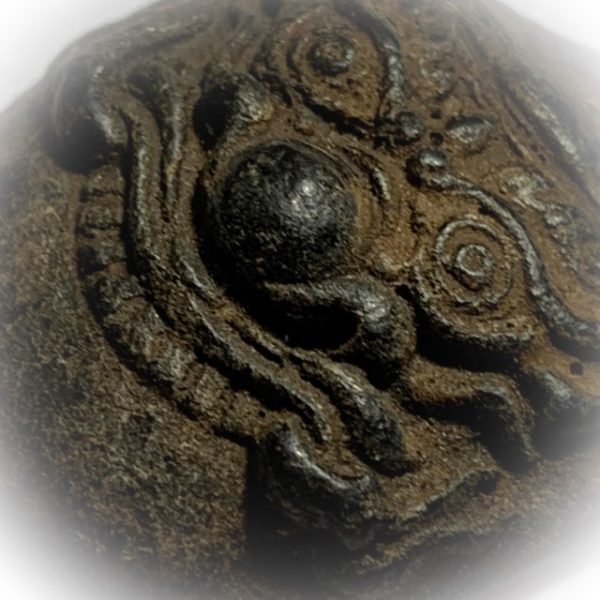 Many people believe that Kroo ba Nanta was the Kroo Ba Ajarn of Luang Por Noi, but this is in fact a myth. Each of these Masters had their own personal Trajectories and their amulets differ in style and empowerment methods.

It would be more accurate to not compare the two, and to see that Kroo Ba Nanta, and Luang Por Noi are equally Meritorious in their Mastery, and were perhaps the greatest Adepts of Wicha Pra Rahu in living memory. 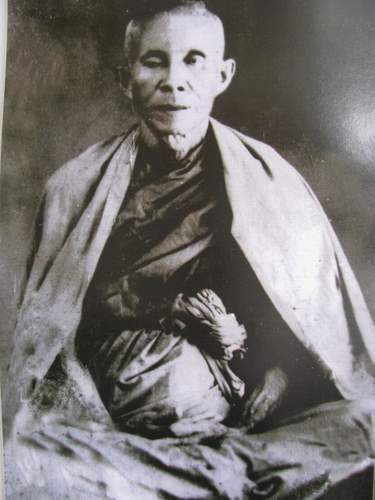 My Guess and Estimation is that the amulet is from Luang Por Noi, using powders from Kroo Ba Nanta, due to the design being influenced by both the Lanna style, the Lao style from which LP Noi’s family ethnicity was derived from, and the style of Phra Rahu design found in Nakorn Pathom, which was where Luang Por Noi spent his time as abbot of Wat Sri Sa Tong, despite being of Lao Lanna Origin. Either way, i myself am proud and happy to keep and study it, and revere it, until somebody decides to take it off my hands as new owner. 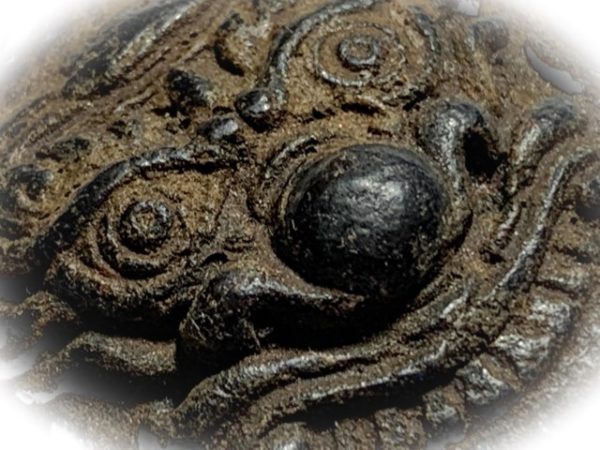 The price would be triple on any of my other websites, and i would go certificate it, which i find unnecessary after seeing various associations certificate amulets with the name of the wrong maker/monk, and trust my own study and judgement, much more, after my experience with amulet associations. 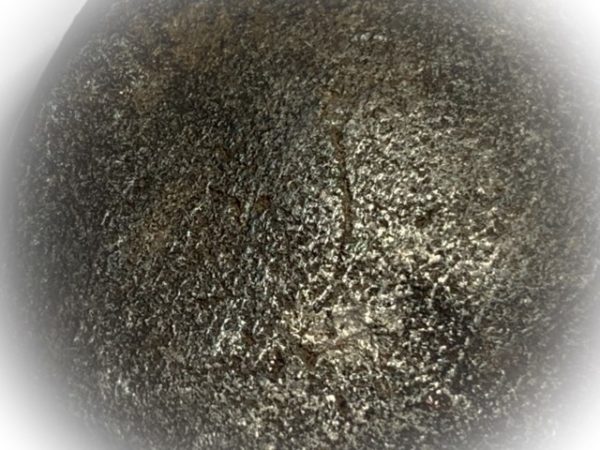 Below and above;; close up of the easily recognisable as old naturally aged sacred powders of one eyed coconut powders mixed with black lacquer (Nuea Pong Kluk Rak), which insinuate about 100 years or more since its making. 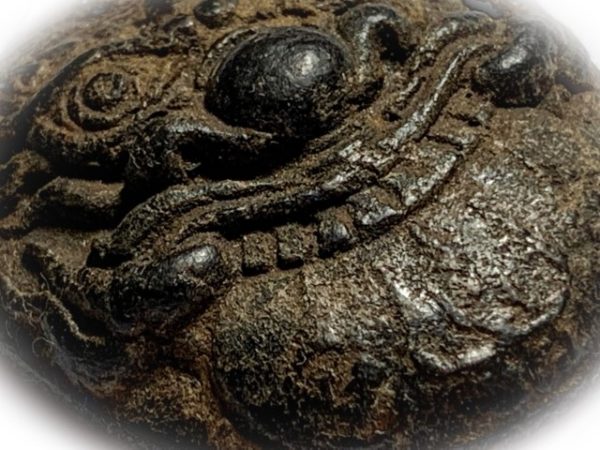 My customers and followers trust me, and this shop is for them, and the prices are set much lower, for those who do not need all the palaver that is seen in the modern international amulet scene. here is where i post my favorite antique and powerful amulets, at my best prices, for you who know me, and who know to come here, to get the best amulets and other Thai magical curios and antiques, at the best price, with less to read, but a much more closer approach to offering amulets in the honest way that i like to express myself with.

To Be honest, i know i can go and have this amulet defined and certificated, and allow its value to multiply tenfold even on the Thai Marketplace, and the greed with all human hearts, even mine makes me want to put this amulet in my other stores, but i promised i would make a special store on my personal Ajarn Spencer HQ website for my friends and trusted customers and followers who have known and used my services for years, and have confidence, to be able to obtain some of the best stuff, at the best price i can, and by writing less (than this article) in each item, will be able to offer the amulets cheaper than any other websites i allow my amulets to be sold on, such as Thailand amulets, Buddhist amulet and Ancient amulet, which require me to spend hours and hours preparing each write-up. This store will have shorter write-ups, but a more direct and straight approach, and explain the amulet exactly as i understand it, with no frills.